New set of restrictions in UK Gambling in 2021

The UK Gambling Commission is always on a mission to make online casino games less intensive and safe. That’s why it has issued new slot restrictions in a recent bid. According to the new rules, many Canadian casino players who used to gamble at UKGC licensed casinos have a chance to be affected. The slot restrictions are soon to be spread across different commissions.

The new rules will introduce a limit placed on the speed of spins and permanently ban various features that glorify losses as wins and speed up the game. Operators are required to display total wins and losses to slot players and such rules should be implemented within 31st October 2021.

According to the commission, the restrictions with respect to online slot games are gaining more popularity among gamblers. About 70% of all the casino games are about to be affected and the new restrictions will also impact the average losses per player.

Let’s talk figures. The UK players in 2019 have spent a massive £2.2bn on different slots. Recently, the UK Gambling Commission has cracked down the fixed odd betting terminals where the players can play casino games in different stores. Now they have set their eyes on bringing the restrictions online by targeting slot games. The slot restrictions are set in place to limit the addictive power of the slots. This, in turn, helps the customers to spend less. Various slot features are also being removed and the players are given more control especially during binge play.

The commission is paying attention to issues like the increased intensity of the play, loss of the players’ control, risk of losing an extensive amount of money. Some maintain that the restrictions will also reduce the risk of harms imposed by gambling.

However, everyone is not in favour of the new restrictions. Especially some British MPs have vehemently criticized the commission. They believe that the commission is not properly equipped to deal with online gambling due to the small size of the community. The restrictions imposed on the slot games can also knock off the software providers who have to limit the features that they are looking to integrate into their games.

Online Gambling Restrictions to Appear in the Future

A ban on gambling companies has also been imposed that has the potential to impact football and darts players. This is considered to be an unpopular restriction among the sports authorities who rely on such sponsorship and the income received from these.

The UK Gambling Commission is on its way to introduce a ban on reverse withdrawals. This function is usually used by online casinos whereby the players can undo their decision and withdraw the winnings instead of using it to play more games. According to the UKGC, reverse withdrawal poses a serious risk to the players as it encourages them to continue online gambling.

In the previous year, the commission raised the age limit of the players of the National Lottery and also banned the use of credit cards as a mode of depositing funds into the accounts of the online casinos.

While all these measures are adopted to promote responsible gambling and ensure the players’ safety, we wonder if the step is going too far. Can it pose a threat to gaming and remove entertainment value associated with online gambling? Time will tell! 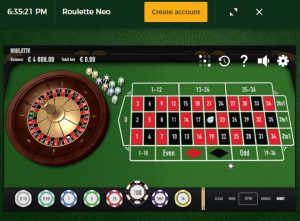 The Roulette Neo from Relax Gaming is mobile friendly simple table casino game with easy navigation and play functions. Maybe too simple for the year 2018