Have you noticed that many online casinos provide the same games? Some of them even share or collect the jackpots. You might think, gambling is a multi million business and you are right about it. The online casinos are making a lots of money but are they the most powerful ones? From our research the online casinos are only a "sales men" and there are companies more powerful in the background. Spincastle is introducing the part number nine of the Gray Eminence of Gambling. In this part we talk about NextGen.

The company has its offices in Stockholm, Sweden and is concerned with developing exclusive software for the Swedish Games Lottery. NextGen today has successfully established itself in London along with introducing additional offices in the places like Las Vegas and Sydney.

The company is known for its wide variety of digital gaming platforms that include a huge variety of games such as online bingo, online casino as well as lottery games. There are a fair number of operators that offer their products to the company. As a result, the company has put together a number of contracts with some of the most famous names in the industry such as Net Entertainment, Play'N Go Casinos as well as Yggdrasil Casinos. Interestingly, the company is also recognized for a number of innovative developments, specifically in addressing or curbing the increasing gambling addiction issues.

NextGen Gaming was founded in the year 1999 by Tony McAuslan and a fellow Aussie who then left the business at its very early stage. Tony McAuslan served as the CEO of the company for the two first years and then took the responsibility of the Director of Gaming Development. In the year 2005, the company was then joined by Matt Davey who joined NextGen after years working for the Northern Territory government. He brought with him a great deal of knowledge as to the emerging online economy alongside the working knowledge of governmental bureaucracy, politics as well as business community. Interestingly, Davey had founded his company back in the year 2002, however he preferred taking a chance on NextGen Gaming and soon became the CEO of the company.

In the year 2006, the company was acquired by a Swedish Online Gaming Solutions Developer, NYX Interactive. Since then, the company has been working with the latter as to the development of online as well as mobile slot machines.

The online casinos of NextGen are known for a variety of striking features in all their great video slots and perfect sot machines. These features include the options such as SuperBet, Up Wild, Select-a-Play etc. The software itself is considered to be a browser-based instant play platform that doesn’t require any download option. Thus, this makes it convenient for all those players who don’t look forward to restricting themselves to making the use of just one device.

The browser based instant play software provided by this company also avails all its games for the mobile devices and Mac users. Some of the most popular slots developed by the company include:

All these slots comprise of excellent animations, 3D graphics as well as entertaining soundtracks. Unfortunately, the company doesn’t create its own video poker titles or table games. However, they carry out a partnership with all the other software providers to serve this particular need. All the games powered by this software could be played in fun mode, thereby permitting the players to test the feature included before they actually head to play casino for real money.

All the newest as well as most popular gaming slots of the company are available for the mobile users and they are making the most of their entire catalog by using the latest HTML5 coding to make sure that all their slots are accessible to all the players. A number of the video slots powered by the company are available in the App Store of Apple so that they could be played and enjoyed using iPad and iPhone.

NextGen Gaming has its licenses as well as partnerships with some of the largest operators of the world and in order to maintain it, the casinos at this company must prove that all the games that they deliver are fair. All the games powered by this software have a seal of approval in order to ensure a fair gaming. The extensive list of the partners that the company has worked with so far is the perfect recommendation for the software developer’s services. The same proves that the company insists on a high-level of fairness as well as security.

Since the company is a part of the NYX Gaming Group, it is licensed by the UK Gambling Commission. The group also follows the regulations which are set out by a number of countries that include The Lotteries and Gaming Authority of Malta, The Swedish Lottery Inspection Organization and the Gaming Supervision Commission of the Isle of Man.

NYX alone has previously won a number of industry awards that includes the 2010 E-Gaming Awards for Innovation in Bingo. NextGen has earned the B2B award for the Social Gaming Operator in the same year. In the year 2013, the company also won the RNG Casino Supplier of the Year Award.

The partnership of the company with Microgaming powered Quickfire has been a huge success. Together, the company released some of the most groundbreaking titles such as Mad Mad Monkey, Hot Hot Volcano, Medusa, Foxin’ Wins as well as Foxin’ Wins Again.

NextGen Gaming is considered to be the jack of all trades of all the software developers. The casinos at this company are easily able to provide some of the most amazing games which are adaptable for a number of platforms. The company has stood out to become one of the best online casino software companies that the world has today.

If you liked this article, you might also enjoy The Gray Eminence of Gambling VIII. - ThunderKick 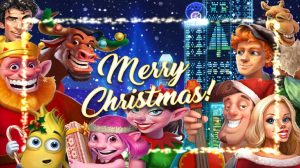 Ho Ho Tower is a video slot game brought to you by Elk Studios. As the name suggests, the subject of the slot could be related to Christmas

I didn't have huge expectations when I first loaded the video slot Dragon Wins from Nextgen Gaming. I am happy to announce